(CNN) -- For the first time, scientists have created human lungs in a lab -- an exciting step forward in regenerative medicine, but an advance that likely won't help patients for many years.

"It's so darn cool," said Joan Nichols, a researcher at the University of Texas Medical Branch. "It's been science fiction and we're moving into science fact."

If the lungs work -- and that's a big if -- they could help the more than 1,600 people awaiting a lung transplant. Lungs are one of many body parts being manufactured in the lab -- some parts, such as tracheas and livers, are even further along.

"Whole-organ engineering is going to work as a solution to the organ donor shortage," said Dr. Stephen Badylak, deputy director of the McGowan Institute for Regenerative Medicine at the University of Pittsburgh. 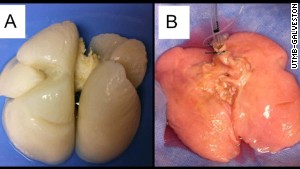 Image A is before new cells were reseeded. The finished product is image B.

The researchers in Galveston, Texas, started with lungs from two children who'd died from trauma, most likely a car accident, Nichols said. Their lungs were too damaged to be used for transplantation, but they did have some healthy tissue.

They took one of the lungs and stripped away nearly everything, leaving a scaffolding of collagen and elastin.

The scientists then took cells from the other lung and put them on the scaffolding. They immersed the structure in a large chamber filled with a liquid "resembling Kool-Aid," Nichols said, which provided nutrients for the cells to grow. After about four weeks, an engineered human lung emerged.

Repeating the process, they created another lung from two other children who'd died.

Nichols said she thinks it will be another 12 years or so until they'll be ready to try using these lungs for transplants.

"My students will be doing the work when I'm old and retired and can't hold a pipette anymore," she said.

Before researchers experiment on humans, they'll try out lab-made lungs on pigs, she said.

Doctors have already had success transplanting patients with synthetic tracheas. The first procedure was done in 2011, and since then, six more have been done.

Two of the patients have died of causes unrelated to their tracheas, said David Green, CEO of Harvard Apparatus Regenerative Technology, which makes equipment used to make engineered body parts.